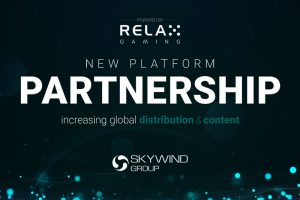 Relax Gaming has secured another important agreement with a developer and provider of online casino content, the company said in a press release issued Monday.

Under the terms of the newly penned deal, Skywind Group will be able to roll out its library of games on the Relax Gaming platform. The platform-to-platform agreement will see Relax Gaming’s operator partners gain access to a number of online casino slot games, including CSI: Crime Scene Investigation, Explosion, and Boomerang Edge, among others.

Skywind Group was established in 2012 by a group of industry veterans. Since then, the company has been providing products for the gambling industry across Europe, Latin America, and Asia. It boasts a rich portfolio of more than 200 mobile-focused games, including online slots, branded online slots, variants of popular casino table games, and arcade games.

Commenting on the recently inked deal, Oren Cohen Shwartz, Managing Director at Skywind Group, said that Relax Gaming is “an important strategic partner” to the group as it is looking to enter regulated online gambling markets at a fast pace.

The official added that expanding the reach of their online casino content to new brands and new markets is a key priority for his company. The deal will enable Skywind’s games to go live in multiple markets and with a number of tier-one operators with which Relax Gaming has established partnerships.

Pleased to Have Grown Stable of Titles Of adding another partner to their list, Daniel Eskola, CEO of Relax Gaming, said they are pleased “to have grown our impressive stable of titles with Skywind Group.” The executive added that Skywind “has an approach to delivering gaming innovations and strong titles that matches our ethos and it’s a pleasure to work with such a talented team.”

The Skywind deal has been the latest of a series of agreements Relax Gaming has announced in recent weeks. Last week, the company unveiled a content distribution agreement with Gaming Realms, under the terms of which Relax Gaming has added the provider’s Slingo Originals series of games, including the largely popular Deal or No Deal Slingo, Rainbow Riches Slingo, and Monopoly Slingo, to its content aggregation platform.

Late last month, Relax Gaming announced a games supply deal with Interwetten. Under its terms, the supplier’s in-house slots and table games went live with the major online gambling operator. The deal also saw Interwetten roll out games by third-party suppliers that are available via Relax Gaming’s Silver Bullet partner program, which contains games by a number of developers.

Based in Malta, Relax Gaming offers more than 570 games to a number of online gambling operators. The company’s growth strategy involves extending its commercial footprint across multiple jurisdictions. Relax Gaming has been able to deliver on that strategy with a plethora of strategic partnerships with operators boasting presence in a number of markets.