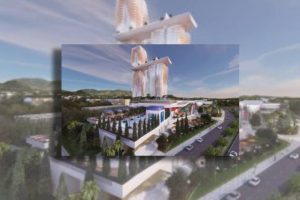 US casino and hospitality operator Mohegan Gaming & Entertainment unveiled Tuesday its concept for a casino resort as part of a larger project for the transformation of Athens’ former international airport into a luxury multi-purpose complex.

Last week, the Hellenic Gaming Commission closed the call for tenders for operators of the casino portion of the larger Hellinikon resort. The Greek gambling regulator said that it had received two bids from interested operators, with those being Mohegan and Florida-based gaming and hospitality group Hard Rock International.

The Gaming Commission is expected to announce the winning bidder by the end of November, according to reports by local media.

Mohegan has tapped Steelman Partners to create the design of the casino resort. The Las Vegas-based architectural firm is no stranger to the integrated casino resorts segment as, over the years, it has designed some of the most iconic casino buildings in the world.

Of their casino plan, Mohegan Chairman and CEO Mario Kontomerkos said that they “understood that INSPIRE Athens was meant to symbolize more than an integrated resort.”

The executive added that:

“It is our hope that INSPIRE Athens would be the catalyst that sparks the entire development of the Hellinikon area into the coveted Athenian Riviera, forever redefining the modern identity of Greece.”

Mohegan’s INSPIRE Athens will consist of two towers. They will be connected with what looks to be an infinity pool placed on top of one of the skyscrapers and about halfway up the other.

Paul Steelman of Steelman Partners said that their “overarching design was meant to be iconic in nature, yet characterize Athens’s historic architecture and rich culture while adopting a new stylistic narrative that inspires the region’s future.”

The resort’s two towers were inspired by the Caryatids, female sculptures that serve as architectural support in temples and other Ancient Greece buildings, taking the place of columns or pillars. 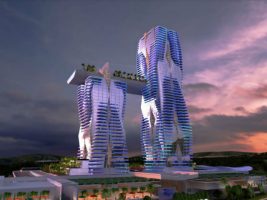 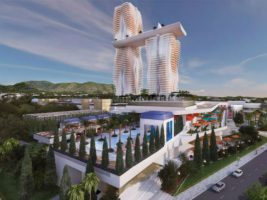 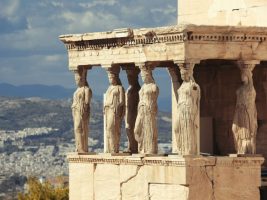 Presenting its concept, Mohegan said that INSPIRE Athens, with its state-of-the-art meeting facilities, multi-purpose indoor event space, and other amenities, “intends to marry world-class luxury hospitality and ceaseless entertainment in a way that’s never before been seen in the south of Europe.”

INSPIRE Athens is expected to create more than 7,000 jobs in the Attica region during and after construction, including direct, indirect, and induced ones. The property is expected to be completed within 24-36 months, Mohegan’s CEO said Tuesday. Mr. Kontomerkos added that they intend to break ground on the ambitious project as soon as (and if) they get the necessary approvals.

Mohegan said that the completion of its casino resort is expected to increase international tourism in the Attica region by at least 10% and to generate millions of euros per year “to both the government and the people of Greece in the form of taxes, infrastructure improvement, and public services.”

Earlier this year, Mohegan announced that it has partnered Greek contractor GEK Terna to jointly bid for the 30-year gaming license the Hellenic Gaming Commission is set to grant, and build the resort, if they win the casino tender.

As mentioned above, the casino resort will be part of a larger complex, the €8 billion Hellinikon. The casino portion of the larger resort will occupy around 15,000 square meters of its overall 6,200,000-square-meter area. The Hellinikon project, backed by Chinese and Gulf investors and set to be built by Greek real estate developer Lamda Development, will also include residential areas, MICE facilities, luxury hotels, museums, high-end retail areas, sports facilities, office towers, a metropolitan park, and a marina, among other amenities.